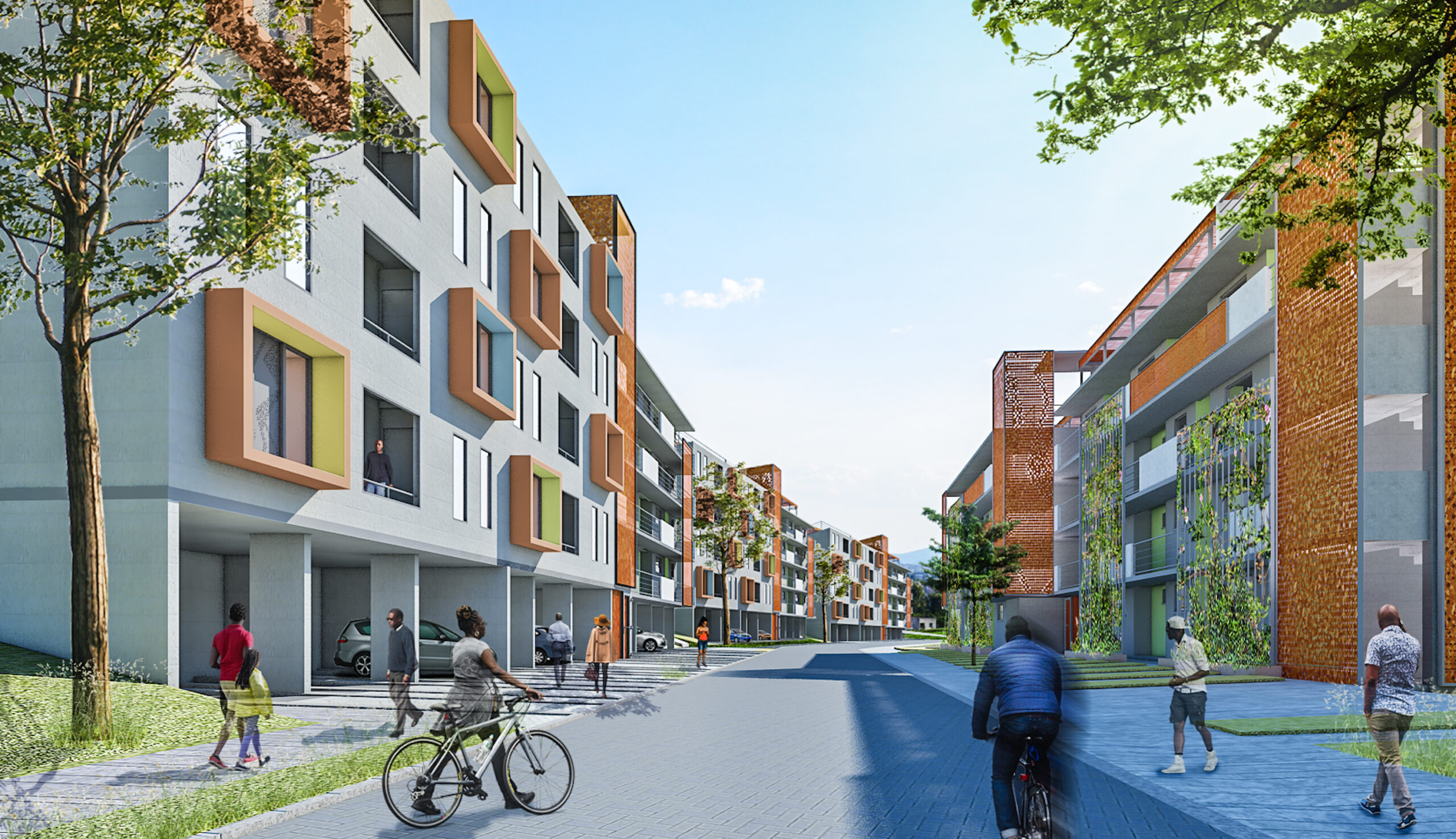 FBW Group harnesses all its multi-disciplinary expertise and experience when masterplanning large-scale developments changing the face of cities across East Africa.

They include the impressive Downtown Kigali project – a mixed-use city-centre urban redevelopment plan created over a number of phases on a 17-acre brownfield site.

The $70m masterplan was completed in 2017, delivering wholesale, retail and office space in the Rwandan capital.

Phase one provided retail areas planned around an integrated transport hub taxi and bus park covering 4.5 acres and serving as the main public transport terminal for the entire city centre.

In 2016 the group also started work on the $130m Rugarama Park Estate, an affordable housing project in Kigali looking to create 2,700 homes in total.

The FBW masterplan for the site includes public green spaces along the central valley with larger mixed-use retail and apartment buildings along a central spine and smaller individual houses located along the perimeter.

The development is planned around pedestrian use, creating a child friendly green environment and features residential play streets.

In the same year FBW’s Kenya office worked on a masterplan for 2,500 residential units and mixed-use satellite development on the Tatu Heights site in Nairobi.

Earlier examples of its masterplanning expertise and innovation can be found in the Kingdom Kampala project in Uganda which began in 2010.

Centrally located in Kampala’s fast developing commercial centre, the mixed-use development includes a five-star hotel tower with adjoined conference centre and a high-density retail and office complex on the lower half of the site.

The key design challenge was the seamless integration of the functions to create one cohesive development without undermining the highly sensitive security requirements of an international five-star hotel brand. Extensive landscaping included a spectacular ‘river feature’.

In Tanzania FBW was appointed to design Mara Oysterbay City in Dar es Salaam, a large mixed-use development on a 24-acre site.

The masterplan for this project included a shopping mall, two hotels with an adjoining conference centre, a 250-bed hospital, multiple office and apartment buildings and a new office for the Tanzania Police Force.

Antje Eckoldt, group director and head of operations in Kenya, says: “A masterplan is a dynamic long‐term planning document that provides a conceptual layout to guide future growth and development.

“Masterplanning is about making the connection between buildings, social settings, and their surrounding environments. That is key to all our work.

“The designs and concepts that we have created for projects across the region are game-changers, delivering economic benefits, creating much-needed housing and improved facilities for communities.”

It is part of consortium carrying out feasibility studies centred on the creation of special ‘trade and logistics clusters’ near borders and points of entry in countries across the region.

Aid-for-trade organisation TradeMark East Africa (TMEA), funded by UK AID and other donors, is behind the strategy to create special industrial parks and export processing zones to attract investors and boost trade.

It is looking to invest $400m to create a million new jobs by 2022 by reducing trade costs by 10 per cent and increasing exports by 25 per cent.

The consortium carrying out the key feasibility work is being led by international development consulting company IPE Global.

It delivered technical and commercial options analysis for the development of a trade and logistics hub for Busia on the Ugandan/Kenyan border. FBW is also involved in a related trade and logistics project with the same consortium in Rwanda, which is working on behalf of its government.

FBW’s engineering division, which focuses on structural, civil, electrical and mechanical works, also continues to deliver for clients including Coca Cola. It has recently overseen a project at the company’s operation in Umoja, Kenya.

Key milestones for this period of FBW’s history include the establishment of the Kenya office in Nairobi in 2015, which included Antje Eckoldt and Rob Woffenden moving to the operation in 2017.

As part of that re-organisation Paul Semenda became Rwanda country manager in Kigali. He was made director of the group in 2020.